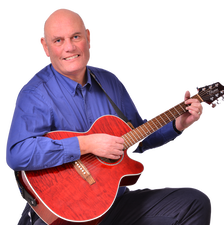 I once had a rather miserable career as a pub-style folk-singer, performing a mix of my own songs and covers of others. As Fleece might have said, "That was all a long time ago, thank God," but writing Four Old Geezers And A Valkyrie inspired the me to buy a new guitar and give some of the music an outing. So all the songs referred to in Four Old Geezers And A Valkyrie really exist.  A number of these songs were released on the fictional album Flying High, with the cover design by lead guitar player Geoff Arrowsmith.

In addition, this area of my website will eventually try to give a flavour of Little Joe Mackay's pet project, a fusion of Scottish folk music and Jamaican reggae christened "rasta-jock". Listen to that at your own risk.

Even Tam's hit Any Way You Want Me You Can Have Me exists, by the way.

But there's more, there's more. My 2018 novel The Blogger Who Came in from the Cold features some new music as well as some of the old stuff, notably The Accidental Christmas Carol. You can find that here as well.

Finally, I've written some short stories, and a couple of little things can be found here to go with those – including a piano piece, the recording of which was certainly the scariest thing I've done.

Please make allowances for the quality of recordings, which are very much in the "cobbled together in the study" category. I can't afford a professional recording studio. Perhaps I should crowd-fund an EP. Then again, you might feel that my music is best left "undiscovered"...